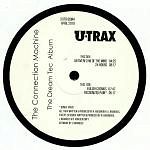 The third release on U-TRAX in 1993 was also a third debut, this time by Natasja Hagemeier and Jeroen Brandjes. Early in their career, they used several artist names, but became most commonly known as The Connection Machine. With their debut mini-album The Dream Tec Album they more or less described their style: dreamy techno. It became an instant Dutch techno classic and U-TRAX is proud and delighted to offer a fully remastered re-release, including three never before released bonus tracks (one of which is digital-only). Natasja and Jeroen resided in Utrecht back in the 90s. In 1991 they assembled all their ideas and recorded the track "24 Hours" with DJ Paradize. Soon after this experience, they started to buy their own gear, all strictly MIDI (which wasn't too obvious in those days). In their early recording years, they had three producer-names (Syndrome, The Connection Machine and Bitch&Bites), that were all collected under the The Utroid Machine Missions umbrella, which was used for their debut on U-TRAX. All tracks on The Dream Tec Album are The Connection Machine's earliest works, from the 1991/1992 years. "An Overflow of the Mind" is a beautiful, dreamy track with almost divine sounds and strange voice-samples that serves perfectly as an introduction to their entire repertoire. Their first production was "24 Hours", and what a brilliant one it is! A well-known jazz-musician talks about a "24 hour party going on", on top of a sinister and trancey rug, woven of sampled sounds from pioneers in electronic music and nailed down to the floor with a deep pounding bassdrum. At the time they made this track, 141 bpm was unbelievably fast... "Evilish Cosmos" is all about a very sad and personal emotion, so everything we say about it will be absolutely wrong. Just listen to the meandering piano line, distorted voice samples - and feel it. The first bonus track on this release is "Recognized Pain", which was intended to be part of the original The Dream Tec Album. It had appeared on the Phuture Classical Section C cassette in 1993, on the famous Drome Tapes label that formed the roots of U-TRAX. It truly is an amazing track: pure sonic terror with haunting rhythms, psychedelic synth lines and shards of voice samples that make the listener feel slightly uncomfortable. "X_Manray" is many electronic music lover's favorite track. It is sooo deep that it is hard not to get hypnotized by it. Warm strings are coupled with deep beats that show up and disappear every now and then. Could serve perfectly to start off any DJ's set, as long as she or he has the guts. Though "Braindrain" is probably the most danceable track on this album, it is carefully designed to tease the listener. Everything in this track drops in too late and every tone, melody or loop last exactly a few bars too long. Designed as a DJ-teaser and so it is. The second bonus track, "Cafe d'Anvers", is another previously unreleased work, of which unfortunately no master recording was saved. All that is left, as far as we know, was an old VHS Hifi tape from the U-TRAX Archives. And that is where this bonus track was taken from. Mastering engineer Thee J Johanz managed to restore the quality of the recording somewhat, while at the same time maintaining its dark, clubby sound, a tribute to the famous club of the track's name in Antwerp, Belgium. "Dream Affected Dream" is one of the most recent productions on this album. It was recorded with CNN playing live on top of it. At this exact moment, CNN was having an interview with David Koresh, the leader of the infamous Branch Davidians sect from Waco, Texas, while they were under siege by an armed police force. Natasja and Jeroen were just ready to record Dream Affected Dream, and spontaneously decided to mix in the audio from CNN. Not very long after that, the cult members set fire to themselves. A very strange and oddly funky track, that also serves as a time-document. The final track is another bonus track. Like Cafe d'Anvers, "Voight-Kampff" is taken from on old U-TRAX VHS Hifi tape and masterfully mastered into a lovely relaxed dreamtech piece. Very suitable to start the Sunday after a long night of clubbing. This track is available for free to buyers of the complete digital album only. Original release date: July 1993. Re-release scheduled for April 19, 2019. This special re-release will be available in digital form for download and streaming, on double black 180 grams vinyl and limited edition double ultramarine 180 grams vinyl. Vinyl comes with 30x30 cm insert art, designed by the artist. Re-mastered and mastered (the bonus tracks) by Bally Hoo Studios.

More by The Connection Machine