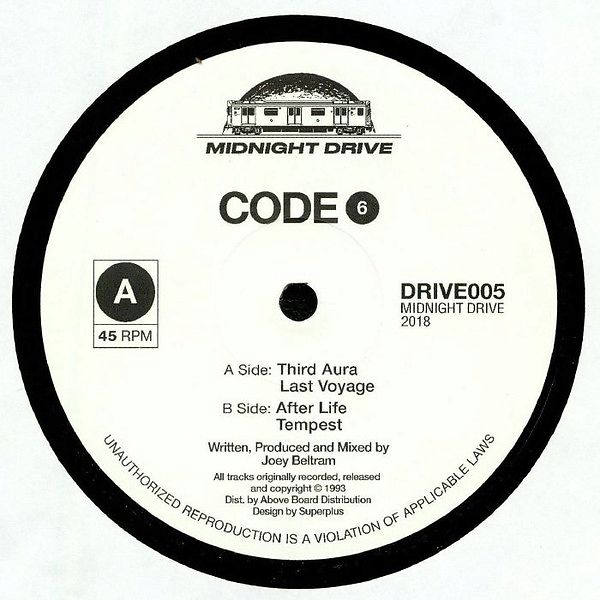 1993 Reissue of this sought after 4 Track E.P. by Joey Beltram. Includes the ace melodic breakbeat gem "Third Aura". All of the tracks on this reissue have been remastered from Joey's DAT archive.

In the early 1990’s, Code 6 was a side project by Joey Beltram. A name that is extremely well known and respected in the world of dance music, a true techno stalwart with a hugely impressive catalogue of music, including more than a few classics and with a DJ and production career that spans almost 3 decades. Recorded in 1993, this 4 track EP is a departure from the style Joey was most associated with during this time period, favouring a more ambient, breakbeat driven and esoteric aesthetic. Contained within is 4 wide-screen snapshots of sci-fi drenched emotion, a raw, melodic tour de force that leaves the listener wanting more. It’s easy to make lazy comparisons with other sonic emanations of the time from Sheffield, Belgium, London and Cornwall in terms of feel, but the ‘Untitled EP’ is very much it’s own planet, a truly original set of short but effective techno-vignettes that still captivate today in 2018. All of the tracks on this reissue have been remastered from Joey’s DAT archive, with the exception of ‘Tempest’ which was transferred from his mint personal copy of the record. All efforts were made to respectively maintain the sonic integrity of this fantastic, lost record.