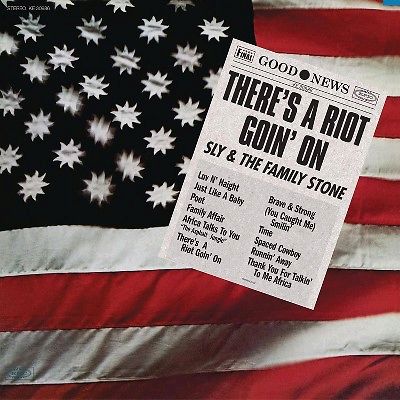 There's a Riot Goin' On (sometimes referred to as Riot) is the fifth studio album by American funk and soul band Sly and the Family Stone. It was recorded from 1970 to 1971 at Record Plant Studios in Sausalito, California and originally released later that year on November 1 by Epic Records.

For the album, Sly and the Family Stone departed from the optimistic psychedelic soul of their previous music and explored a darker, more challenging sound, employing edgy funk rhythms, primitive drum machines, extensive overdubbing, and a dense mix. Conceptually and lyrically, There's a Riot Goin' On embraced apathy, pessimism, and disillusionment with both Stone's fame and 1960s counterculture amid a turbulent political climate in the United States at the turn of the 1970s, influenced by the decline of the civil rights movement and the rise of the Black Power movement. The album's title was originally planned to be Africa Talks to You, but it changed in response to Marvin Gaye's album What's Going On (1971), released six months before Riot.

More by Sly & The Family Stone