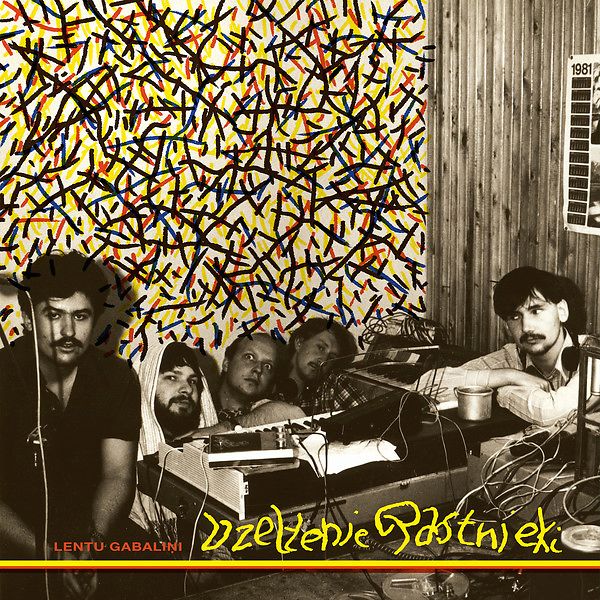 Another killer release on Dark Entries
€ 25,95

Dzeltenie Pastnieki are a Latvian new wave band formed in 1979 in Riga, Latvia. Their name means “The Yellow Postmen” in Latvian. The constant core members of the band have remained Ingus Baušķenieks (bass, keyboards, vocals) and Viesturs Slava (guitar, keyboards, vocals), with Zigmunds Streiķis (keyboards) and Ilgvars Rišķis (drums). They released six albums between 1981 and 1987. All were recorded at the band’s home studio and distributed on 1/4″ reel-to-reel tape and compact cassette, with no artwork. Their sound ranges from electronic post-punk to experimental tape manipulation all sung in Latvian.

‘Lentu Gabaliņi’ is a 10-track compilation featuring songs from each of the band’s six albums, all songs appearing on the vinyl for the first time. In Fall 1981 the band recorded their debut album, ‘Bolderājas dzelzceļš’ (The Railroad of Bolderāja) a mix of dubbed out guitar/bass/drums. For their second album ‘Man ļoti patīk jaunais vilnis’ (I Really Like New Wave, 1982) the band used a Estradin Pulsar drum machine made in Russia and adopted a synthesizer-based sound. Following a period of inactivity, the band were asked to compose the music for an amateur stage adaptation of Lewis Carroll’s ‘Alice’s Adventures in Wonderland’ and ‘Through the Looking-Glass’. The resulting album, 1984’s ‘Alise’ (Alice) adopted a colder minimal electronic sound, largely due to its modest recording circumstances. Leftovers from ‘Alise’ as well as even earlier sessions formed the basis for the fourth album, ‘Vienmēr klusi’ (Always Quiet) also released in 1984. ‘Depresīvā pilsēta’ (The Depressing City) was assembled from out-takes, alternate versions, and solo tracks by individual members of the band in 1986. ‘Naktis’ (Nights, 1987) could be seen as a ‘back to the roots’ effort that made use of the progress of home studio advances made by Baušķenieks over the previous years.

Each copy includes a double sides 11x11” insert with never before seen photos and notes of the six originally releases 1981 till 1987. All songs mastered fully analogue from the original tapes at Bicycle Systems, Rīga, by Ingus Baušķenieks, 2016 Originally released in 1981-87.