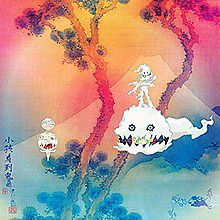 Kids See Ghosts is the debut from the hip hop duo of the same name featuring Kanye West and Kid Cudi.

It is the third of five 7-track 2018 albums produced by West succeeding Pusha T's Daytona and his own yeand preceding Nas' Nasir and Teyana Taylor's K.T.S.E. Fans have been anticipating an album length project from the longtime collaborators for a decade now and the intriguing Kids See Ghosts is a cathartic and confessional affair with both artists documenting bouts of depression and struggles with drug abuse throughout.

"We just have this chemistry that's undeniable, especially when we have to fight for it with each other," Cudi said. It includes contributions from Pusha T, Yasiin Bey, Ty Dolla Sign and a posthumous vocal sample of Louis Prima.