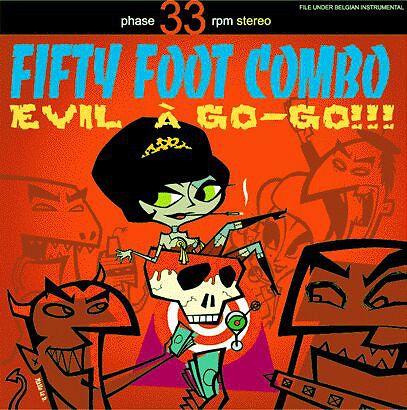 Yes, at last! The phenominal Fifty Foot Combo album 'Evil A Go-Go!' is available again, 20 years after it's official release. Now you can own this slab of garage punk influenced surf for a mere fraction of the collectors market price!

A timely release for the 20th anniversary of this long out of print album…A true classic of the Surf/Instro/Garage style. 14 tracks of surfing go go beat with a driving Hammond behind, gives it a slight 60’s feel…From the Eastern tinged ‘Ali Baba’ through the Jungle rockin’ sound of ‘Pygmee Dance’  to the swirling organ of ‘The Uninvited’ this album never lets up….A genre defining LP which helped set the mould for the current crop of Surf/Instro groups riding on the crest of a wave !

File next to Messer Chups, Jungle Exotica or Belgian Instrumental…..