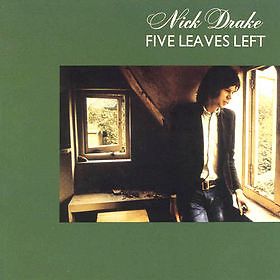 Five Leaves Left is the debut studio album by English folk musician Nick Drake. Recorded between 1968 and 1969, it was released the latter year by record label Island.

A list of "The 100 Greatest Debut Albums" in Uncut in 2006 placed Five Leaves Left at number 29. The record was also included in a list of "Debut Albums That Changed Music" in Q magazine in 2017. In a 2007 Mojo article titled "100 Records That Changed the World" Five Leaves Left was placed at number 78. It is also included in the book "1001 Albums You Must Hear Before You Die", which called it "a remarkable work: stuffed with complex, introspective music but leavened with arrangements and production straight off the top shelf ... the record is full of glittering, warm sounds that have not aged a jot in the interim", and concluded that Drake "rarely excelled himself more than on this first album".