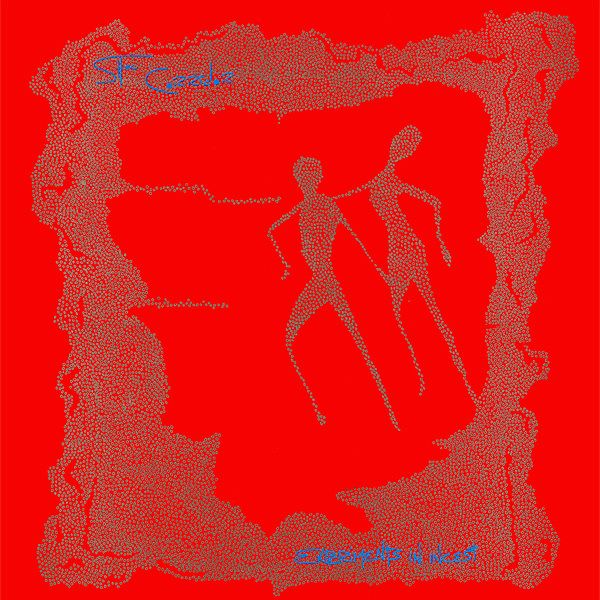 Shoc Corridor was the London post-punk quartet of Paul O’Carroll (Voice, Synth), Andy Garnham (Synth, Bass, Drum), Chris Davis (Guitar, Bass, E-Bow) and Nogi Prass (Synth) named after the Sam Fuller film from 1963. Chris met Nogi shortly after moving to London in 1979, started playing music together, fell madly in love and decided to form a band. They recruited Andy, who had previously played in a band with Steve Luscombe of Blancmange, and lyricist and vocalist Paul. A home studio was set up at Andy’s flat in Notting Hill, where the band recorded and rehearsed. More interested in studio experimentation than live performance, the band only played a handful of gigs. Their influences were wide reaching: Kraftwerk, Neu, Cabaret Voltaire, Eno, PIL, and Joy Division. Their equipment list included a Korg MS-20, Wasp, Pro-One, Roland TR-808, WEM Copicat, guitars, bass, e-bow and an assortment of effects pedals. The crucial fifth member of the band was, of course, a TEAC reel-to-reel 4-track recorder.

After recording a four song demo they were offered a deal by Shout Records. The debut 12” single, ‘A Blind Sign’, was released in autumn 1982 and the band booked a studio to record an album’s worth of songs that winter. But Nogi received notification from the home office that she would have to leave the UK when her visa expired at the end of the year. Chris was faced with a dilemma – follow Nogi to Israel or continue with the band. Nogi and Chis recorded their tracks for the album and left London shortly after. Paul and Andy were left to complete the album at Ollie’s Studio with Dutch engineer Paul Groothuis. It was titled “Experiments in Incest” and released in March 1983. Six songs, clocking in at almost 40 minutes, the album is largely instrumental pieces built around electronic rhythm tracks and layers of ethereal keyboard melodies. Evocative and dreamy, the music escorts you on a tour of icy landscapes, with Paul’s occasional deep, rich vocals guiding the way. As one reviewer stated, this album is a “hypnotic electronic soundtrack music for a movie of the mind”.