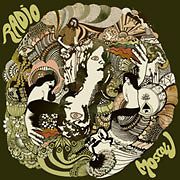 RADIO MOSCOW is a psychedelic blues rock trio from Ames, IA, led by guitarist/drummer/singer/songwriter Parker Griggs, and this, their self-titled debut album, is produced and engineered by BLACK KEYS guitarist/singer Dan Auerbach. Dan was given a demo by Parker after a BLACK KEYS gig in Colorado, and he liked it so much that he offered to produce their debut album in his own studio, The Pie Co, in Akron, OH.

Parker Griggs originally cut his teeth playing garage punk, but his sound, although heavily influenced by sixties garage music, is also channeled through the blues, with experimental breakdowns, unpredictable tempo changes, crazy rave-ups and fuzzed out psychedelic guitar work; the result is an exciting and truly distinctive sound. Parker plays all the instruments on the album except for bass, played by Luke Duff, and slide guitar on "Deep Blue Sea", which is played by Dan Auerbach.

RADIO MOSCOWs debut is a guitar album reminiscent of the pre-punk era, and it will certainly delight fans of the BLACK KEYS and COMETS ON FIRE alike.