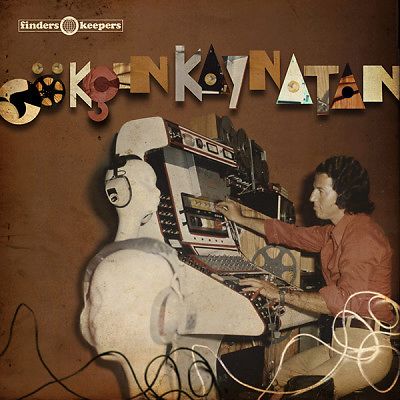 The missing component in the history of Turkish pop and one of the earliest exponents of Turkish electronic music alongside İlhan Mimaroǧlu and Bülent Arel, Gökçen Kaynatan electrified the rock and roll scene of the late 50s/early 60s – sending teenagers wild with his custom built guitars and back lines – helping charge the climate for the birth of Anatolian rock. Then, from the sanctuary of his private studio, he revolutionised the industry with his pioneering use of electronics whilst hanging the sonic wallpaper in the living rooms of an entire generation of telly addicts as in house composer of choice for Turkey’s first national television channel TRT 1.  Despite having a modest discography of only four 7” singles to his name his influence is a major current that flows through over 50 years of Turkish pop culture.

Compiled with unparalleled access to his private studio vault, Finders Keepers proudly presents the first-ever collection of Gökçen Kaynatan’s pioneering early electronic works. Featuring a selection of his experimental pop and rock recordings dating from as early as the 1968 it features both of the highly sought after 1 Numara singles – including a never before heard extended version of Evren – as well as previously unheard archive material and songs recorded for and broadcast exclusively on TRT 1 – most of them never to be repeated. In helping Gökçen end his self-imposed 44-year exile from the record industry we can now share with you the first of these important recordings from a genuine maverick who helped shape the face of modern Turkish music, as well as shedding some light on the rise of one of Anatolian rock and pops must fruitful and experimental periods that began with the arrival (and subsequent explosion) of domestic synthesisers on the Turkish scene.