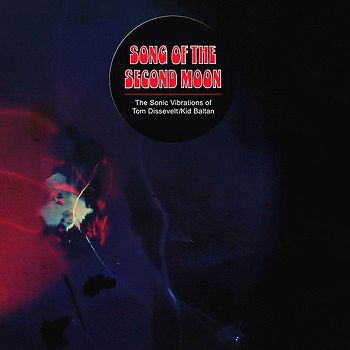 LP version. 2015 release. Fifth Dimension present a reissue of Tom Dissevelt and Kid Baltan's Song Of The Second Moon: The Sonic Vibrations Of Tom Dissevelt/Kid Baltan, originally released in 1968. Song Of The Second Moon is a compilation, of sorts, with the best tracks by two electronic music prophets, Tom Dissevelt (1921-1989) and Kid Baltan (aka Dick Raaijmakers, 1930-2013), created in the late 1950s and early 1960s. Before the release of Song Of The Second Moon, the same album was released in 1962 as Electronic Music under the moniker of The Electrosonics. While kneeling to the gods of kraut and their epic cosmic journeys, we should always keep in mind that courageous music aficionados from a classic or jazz background have been as far out before, and may have been even further out. There are shreds of melody and passages reminiscent of primitive rituals, but most of the time this is a gathering of electronic sound eruptions, strange rhythmical patterns, and swirling noises. It is definitely a mind expanding experience that has enough melody to conjure an enchanting atmosphere considering its radical approach to popular and progressive music. Nice Egyptian and quite mythical harmonies created by an early synthesizer on a pulsating rhythm-bed build the song "Sonik Re-Entry", one of the more accessible tracks. Orchestral music and jazz are melted somewhere on this record with elements of exotica, bits and pieces of gentle Latin sounds, and whatever was popular back then being swallowed by thinking machines. And suddenly a dark swing played by an orchestra hits your ears with quite mysterious harmony patterns interwoven with the occasional freak-out, either in an electronic manner or with a free jazz expression. It demonstrates how well modern, yet handmade, popular music and electronics could work together. All this happened years before there were bands like The Silver Apples or even Hawkwind. Recommend for fans of Pierre Henry, musique concrète in general, and Stockhausen.