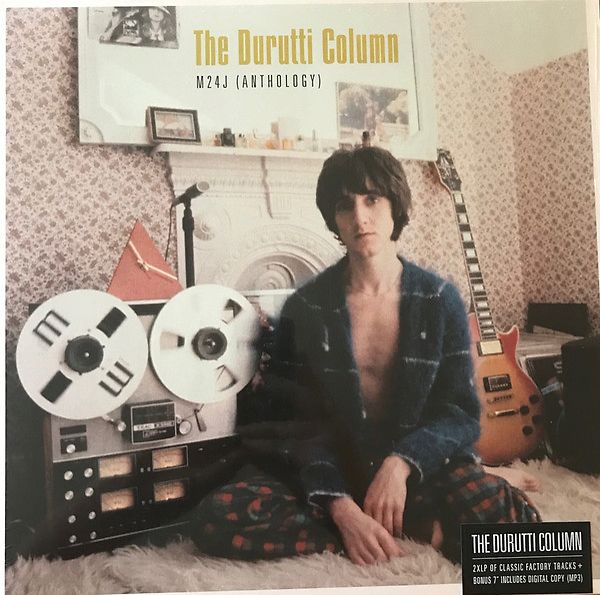 M24J (Anthology) is a collection of music recorded by The Durutti Column between 1979 and 2011.

M24J (Anthology) includes selections from The Return of the Durutti Column, LC, Another Setting, Short Stories for Pauline, Without Mercy, Circuses and Bread, The Guitar and Other Machines, Vini Reilly, Obey the Time, Treatise on the Steppenwolf and A Paean to Wilson.

“The Durutti Column was Tony’s baby,” says Durutti mainman Vini Reilly. “We were the first act signed up to his Factory club night, and the first band signed to Factory Records. Tony became my mentor, somebody to look up to. He was a very tough character, yet he was very gentle. He had many sides. The biggest arguments with Tony were that he wanted to stop me singing with my schoolboy lyrics and my dreadful voice.”

Double gatefold sleeve, printed on white matt board and including a digital copy (MP3). The bonus 7" features two previously unreleased live recordings: a cover of Peter Green's "Albatross", recorded at the Rescue Rooms in Nottingham on 16 May 2004, and "Spooky Tune", recorded with Poppy Morgan at the Bridgewater Hall in Manchester on 30 April 2011, Vini's last major concert to date.

More by The Durutti Column