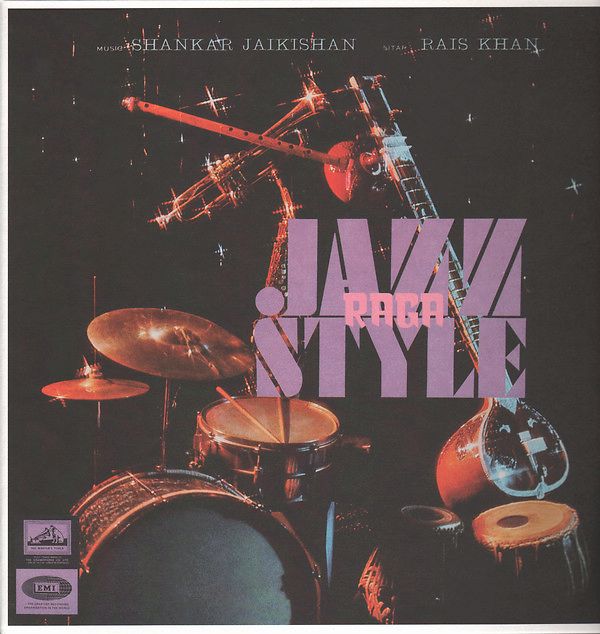 Raga Jazz Style is an original Indian excursion into Indo-jazz fusion. A one-away recording from the almost unknown Bombay jazz scene, it is among the few jazz LPs to hail from the subcontinent.

Singh and Panchal were a dominant force in Hindi film music from the late 1940s onwards. Shankar had been trained in classical tabla, while Jaikishan was an expert harmonium player. They worked together on well over a hundred films, and their innovative compositions and orchestral scoring revolutionised the music of the nascent Bollywood industry. Central to their sound was regular collaborator Sebastian D’Souza. From 1952 onwards, D’Souza would work on every Shankar Jaikishan soundtrack, eventually becoming Bollywood’s most coveted musical arranger.

Originally from Goa, D’Souza had cut his teeth in the dance-band era, arranging and playing with his uncle’s jazz bands in Lahore and Quetta. After Partition, he had moved to Bombay to follow the reliable work provided by the film industry, where Goan musicians had become the mainstay of Bollywood’s film studio orchestras. Goans were also the core of Bombay’s thriving dance-hall and hotel-based jazz scene, with artists including saxophonist Braz Gonsalves, guitarist Amancio D’Silva and trumpeter Chic Chocolate all working in the city during the post-war years.

The team assembled for Raga Jazz Style were drawn from this inventive and forward-thinking milieu. Pianist Lucilla Pacheco, saxophonist Manohari Singh and guitarist Anibal Castro were all fixtures on the Bombay jazz circuit, while drummer Leslie Godinho is reputed to have taught Joe Morello the 5/4 ‘Take Five’ beat when they jammed together during Dave Brubeck’s State Department tour of India. To this jazz backbone was added the sitar of Ustad Rais Khan, scion of long line of classical instrumentalists, and nephew of the renowned sitarist Ustad Vilayat Khan.

Bombay’s jazz modernists had been experimenting with the fusion of ragas and jazz since the 1950s, long before American or British jazz musicians had tuned in to Indian classical music. But very little of this exciting scene was ever captured on record. Raga Jazz Style offers a rare chance to hear the innovative sounds of the Indian jazz scene, as peerless composers Shankar Jaikishan and arranging supremo D’Souza join with veteran Bombay jazzers to explore classical themes in a jazz setting — eleven ragas to a swinging beat!


This is a highly impressive inaugural salvo by Outernational Sounds, using original masters and beautifully rendered facsimile artwork, with 180g vinyl pressed at Pallas, in Germany.