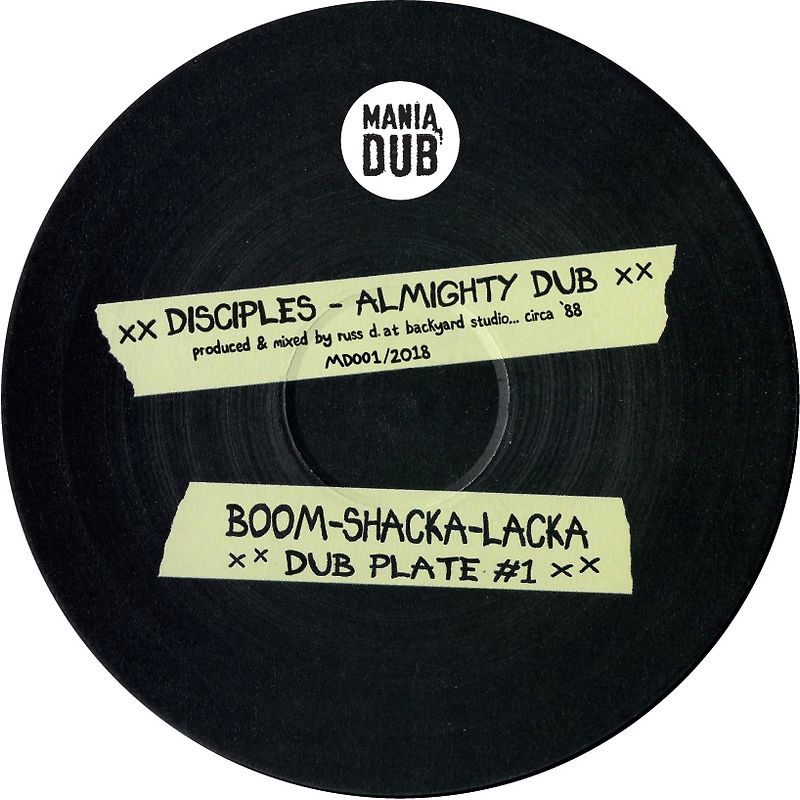 Music Mania and Indica Dubs is proud to present their first joint-release in their Mania Dub series. Produced in 1988 by The Disciples, Almighty Dub is one of the most distinctive instrumental Dubs produced in that era. The Disciples were formed in 1986 by brothers Russ and Lol. They were given the name by Jah Shaka, after producing exclusively for him.

"Almighty Dub, this was recorded around 1988 in my bedroom on a Fostex M80 8 track reel to reel, I used the then newly made Alesis HR16 drum machine which had quite a nice live sounding drum set, the rest was live played bass, rhythm guitar, various percussion and Yamaha CS01 synth for melodies... Those days we churned out dubs and everything went to Jah Shaka, he sometimes used to give me old 1/4" reels to mixdown on, some I think came from the BBC, they used to have radio programs on them which I’d have to wipe before I used them... We used to go a lot of his dances those days, and he regularly played our dubs, on occasions I’d count a dozen different tunes played in a single dance, and every now and then you’d have certain tunes that would just ignite the crowd, this tune was amongst them getting regular play, I remember dances in Southall and Vauxhall Arches and so on where it used to mash up ... we never used to title tracks those days and just left it to Shaka but I never heard what he called it so when I later released I just chose something I thought appropriate...

Zion Rock Dub was recorded around similar time and with fairly much the same equipment with the exception that I had a new keyboard that I used for piano, it also had an inbuilt sequencer and I programmed the flute synth sound to do some arpeggiation runs, it wasn’t sync’d with anything and I just triggered it to play to fit the riddim, it was kind of like a little magic that it worked nice, the tune used to mash up plenty dances too.