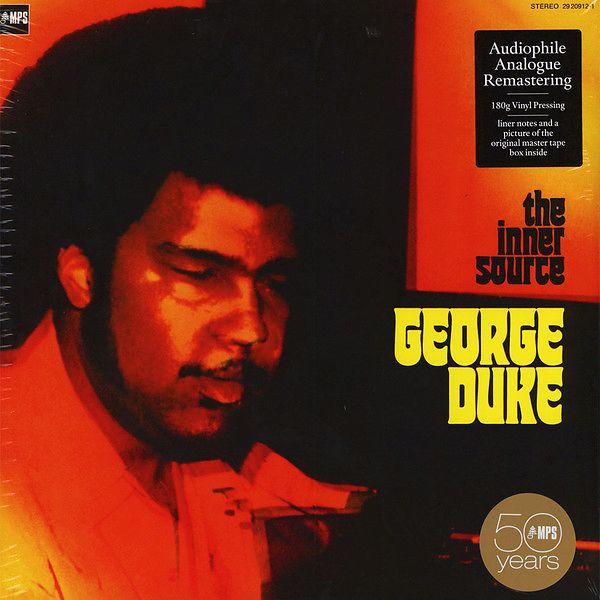 Originally released on the German record label MPS (for whom he would record a number of his early albums), this reissue of George Duke’s The Inner Source presents an interesting time in his career. Having joined Frank Zappa and The Mothers Of Invention in 1969, Duke then went on to join Cannonball Adderley in 1971, before rejoining Zappa and The Mothers and going on to be a part of the ensemble that created many of Zappa’s classic albums, such as The Grand Wazoo and Apostrophe (‘).

On Chapter One of his fusion autobiography, Solus, Duke, along with the skeleton crew of bassist John Heard and drummer Dick Berk, tries out the new compositional philosophy he had absorbed from his work with Adderley. The album was obliged to maintain a jazzy environment, illustrated by the harmonically flowing piano improvisation on 'Love Reborn' and the bop-influenced business of 'The Followers'. But the record also signifies the importance of the keyboards in all their diverse contexts – the funky rock of 'Au-right', and the smoldering, dreamy feel of 'Peace', for instance. And on 'Manya' Duke lives it up as he shows off his exuberant experimental synth side.

The Inner Source continues in the same vein. 'So There You Go' is a downright delightful waltz featuring e-piano, whereas 'Some Time Ago' is pure tonal color and atmosphere. We find an exotic gem in 'Nigerian Numberuma' in which an African Lamellophone is craftily simulated with an echoplex and ring modulator. Duke also begins to vary the lineup here. 'Feels So Good' and 'My Soul' are reinforced with Latin percussion, and incisive horn and reed instruments (luminaries from the Thad Jones and Santana entourages). The same with the title track, a masterstroke of quintet dramaturgy, with Duke on his first instrument, the trombone. As a curiosity, two basses compete with each other on 'Twenty Five'. The last piece, 'Always Constant', is a more open piece that spontaneously unfolded in the studio.