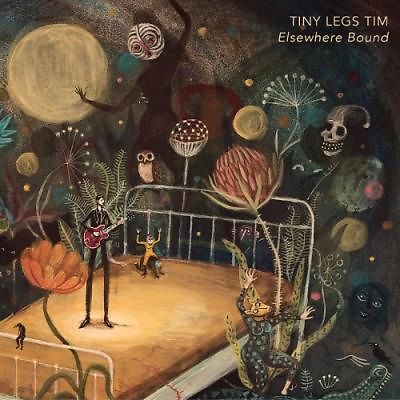 On the colourful fifth studio album ‘Elsewhere Bound’, Tiny Legs Tim swaps the acoustic bare-to-the-bone intimacy of its predecessor ‘Melodium Rag’ for a fleshy production and a large band.

Steaming horns and brooding percussion set the tone. In the background, a honky-tonk piano is stamping away and a harmonica wheezes, while voice and guitar tell a universal story. The atmosphere is welcoming and festive, but the salty smell of sweat and tears imply lingering disquiet.
‘Elsewhere Bound’ draws on the tradition of the blues, but reveals itself as an intriguing change of direction in comparison to the stripped-down ‘Melodium Rag’. The direct approach and the search for authenticity during the recording process was kept, but TLT felt the need to push the boundaries on ‘Elsewhere Bound’. Musical impressions during a journey through New Orleans (classic jazz, the remarkable horn arrangements, the contemporary Nola-funk) paved the way. With the new album, TLT is picking the fruits of that approach.

Tiny Legs Tim knew from the beginning with whom he wanted to record the new album and brought together a fantastic band consisting of experienced musicians with an own style and personality. TLT consciously kept the production loose. ‘Elsewhere Bound’ distinguishes itself by its vision and its attention to detail. The musical freedom the musicians were granted within the contours of the album is highlighted by their spontaneous contributions. They recorded the album live in one venue (no overdubs), which results in a sultry mixture of Blues, Soul, Rumba, Americana, Neil Young (the atmosphere of ‘On The Beach’), Touaregblues, Louisiana Swamp, and Woodstock Rhythm & Blues.

You can listen to first single 'Elsewhere Bound' below!