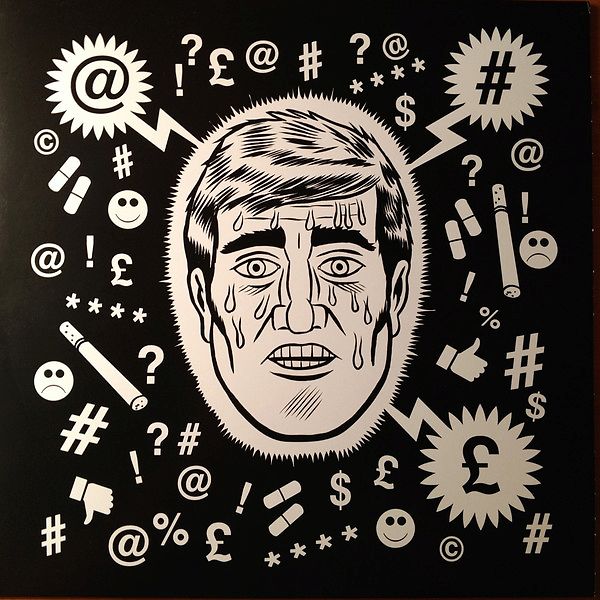 A superb work of recondite sonic fiction, Blade Jogger is the palpably clammy tale of an erstwhile Salford doorman with a taste for ‘SWENDAB’ - a new drug of potent psychotomimetic efficacy - set to a backdrop of Brexit bruxism. Conjured by author and artistic director of The White Hotel, Austin Collings (Renegade: The Lives at Tales of Mark E. Smith & The Myth Brilliant Summers), narrated by James Stannage, and set to a synthesised score by Bill Ryder-Jones (The Coral) and By The Sea. Think Anthony Burgess meets Savoy with sound by Martin Hannett in Delian mode. The White Hotel’s shadow looms large over proceedings. Jog on…

“The place is England: a horrible electronic slum. The time is 22 minutes and 11 seconds into the future. A new drug - SWENDAB - is doing the rounds, sending everybody round the bend - as per. And as ever, here in this ‘less-than-United-Kingdom’, the rain must fall continuously. (It’s a wonder we haven’t all rusted by now.)

Rebelling against the drudgery of his surroundings, trapped inside his own fragile psyche - with no map nor money - meet GAZ-15: ex-bouncer/ex-lover/full-time-fuck-up.

Tonight, like every other night, he will go AWOL, lost in ‘the hallways of always’ of another SWENDAB-binge, searching for a meaning he knows he will never find. All those memories leaking into the eternal drainpipe. What a monster he’s made of himself. Not quite human. Oh to be a clone of others.

Evoking the underbelly of urban life, along with an even darker and deeper spiritual dimension, this bleakly-comic and moving musical collaboration between writer Austin Collings (Renegade: The Lives & Tales of Mark E Smith & The Myth of Brilliant Summers) and By The Sea, is Blade Runner re-written and re-scored by two steam-punks waiting to see their Jobseekers’s contact, or Samuel Beckett’s Krapp’s Last Tape soundtracked by Delia Derbyshire, or simply War of the Words -  a 22-minutes and 11 seconds ‘single’ that summons a feeling of medicated drift, of hearing beautiful sounds through some kind of filter, as time collapses in on itself.”