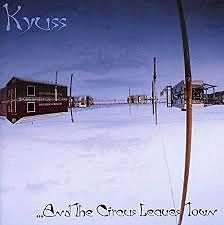 The mighty Kyuss walked out of town leaving us with a final album, desert stoner rock'n roll!
€ 29,95

Postponed to 23/07, we will ship asap when stock arrives, thanks for your understanding and patience!

...And the Circus Leaves Town is the fourth and final album by Kyuss, released in 1995, nearly a year before their breakup. The mighty Kyuss walked out of town leaving us with a final album.

Drummer Alfredo Hernández (Yawning Man) replaces Brant Bjork, who left Kyuss in 1993. The album features a tighter and more straightforward sound, both in songwriting and production, than the band's preceding efforts.  The album was not as commercially or critically successful as the previous Blues for the Red Sun and Welcome to Sky Valley.