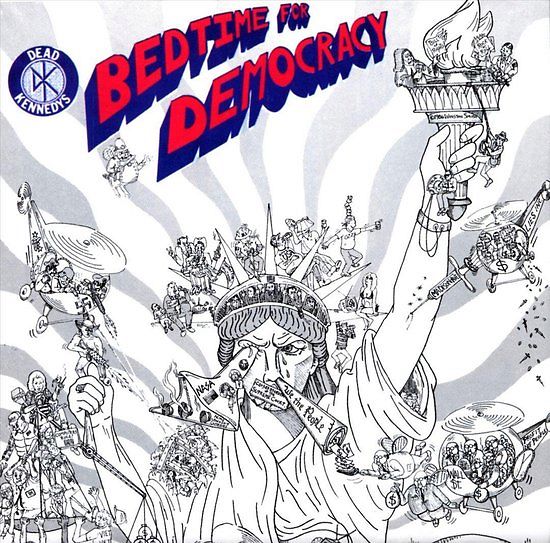 The album's title refers to the 1951 comedy film, Bedtime for Bonzo starring Ronald Reagan and also reflects the band's weary bitterness from the trial they were undergoing at the time over the controversial art included with their previous album. By the time recording of Bedtime for Democracy had begun, the Dead Kennedys had already played what would be their last concert with Jello Biafra and announced their breakup immediately after the release of the record.

Dead Kennedys were one of the most popular and important American hardcore punk bands of the late '70s/early '80s. They formed in San Francisco in 1978 when East Bay Ray placed an ad in a music paper that vocalist Jello Biafra responded to. They were soon joined by bassist Klaus Flouride, drummer Ted and a second guitarist known to posterity simply as 6025. The latter departed in March of 1979, while Ted was replaced at the very end of 1980 by D.H. Peligro.

It wasn't too long before the band gained a considerable following around San Francisco. Live, DKs were a combination of chaos and theatrics. Their sound could be described as a cross between the Sex Pistols and the Ventures. Underpinned by an acute sense of humor, their songs satirized the twin elements of extreme violence and conservatism that characterize much of American life.

After deciding to call it quits in January of 1986, the Dead Kennedys completed the recording of Bedtime For Democracy later that year, their fourth and final full-length release. Despite the impending doom, the band rocked as tight as ever, with Ray's voodoo/surf guitar, Flouride's thumping bass and Peligro's skin bashing providing the perfect "sturm und drang" for Biafra's words. Their swan song is comprised of 21-tracks including "Chickenshit Conformist" which sums up the band's apathetic view on the state of the genre they helped shape with lyrics like, "Punk's not dead, it just deserves to die." Classic political punk rock, often imitated, never duplicated!