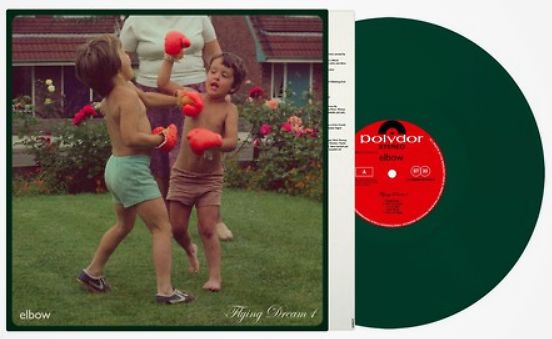 Now in their third decade as a band, elbow wrote Flying Dream 1 remotely in their home studios before coming together at the empty Brighton Theatre Royal to perfect, perform, and record the songs. A film crew covered the final recording sessions for a forthcoming documentary.

Singer Guy Garvey says of the unique recording location: “Hiring a two hundred year old theatre that has never in its history been closed for so long was something that could only be done under the circumstances….nice to turn it on its head in that way. Recording in a splendid generous space with no audience was something that throws an anchor in the times that the record was made in.”

During the first lockdown the band recorded the elbowrooms sessions and uploaded them to YouTube. They used that impetus to begin writing individually, sending each other little love notes over the weeks and months, and these sketches gradually became songs.

“We realized we were making a record free of the usual creative guidelines,” noted Guy. “We love patient, quiet, whole albums like the last Talk Talk records. John Martyn’s Sold Air and Bless the Weather, PJ Harvey’s Is This Desire, Chet Baker Sings, the Blue Nile’s Hats. Kate Bush’s Hounds of Love & Van Morrison’s Astral Weeks. We’ve always written songs like this, but it felt natural to make an album that focuses on the gentler side of our music. There have been challenges, but through them writing together remotely was a lifeline. It’s bruised and wistful, nostalgic, and thankful. We’re so lucky that all our family and friends are safe. It’s about that love”

Flying Dream 1 was recorded at the band’s home studios in Manchester and London and Brighton’s Theatre Royal during 2020 and 2021 and mixed at Blueprint Studios, Salford. The album is produced by Craig Potter. Long term collaborator Alex Reeves returns on drums and percussion with Sarah Field on clarinets and saxophones. Backing vocalists were Wilson Atie, Adeleye Omotayo, and Marit Røkeberg from London Contemporary Voices and old friend and long-time collaborator Jesca Hoop.