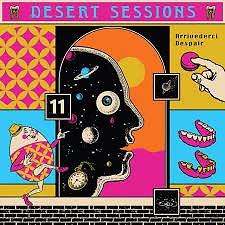 The Desert Sessions are a musical collective series, founded by Josh Homme.

Between 1997 and 2003, different incarnations of that group released 10 different albums. It’s 16 years later, and Homme has announced a new Desert Sessions Album. Vols. 11 & 12 is out October 25 via Matador.

Previous contributors to the famous Desert Sessions series include members of Homme’s bands Queens of the Stone Age and Kyuss, PJ Harvey, Dean Ween, Twiggy Ramirez, and others.

In 1997, Josh Homme (Queens of the Stone Age) and a handful of friends retreated to the desert of Joshua Tree, CA in order to isolate themselves from the distractions and comforts of their everyday lives. What began as a casual writing and recording session amongst friends has since become a project of legend. Spanning twelve volumes over the course of two decades, Desert Sessions has featured some of music’s most cherished icons stepping out of their comfort zones and collaborating with one another to create some of the most exciting music of their careers.

More by The Desert Sessions