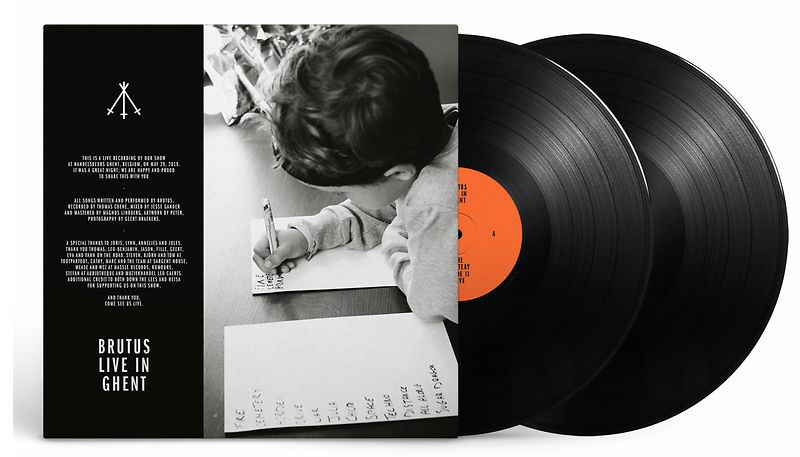 + SIGNED BRUTUS POSTER
€ 28,95
PICK-UP AT SHOP / FREE SHIPPING FOR ORDERS WITHIN BELGIUM AND EXCEEDING € 50 / Shipping costs are dependent on various factors and are calculated in your shopping cart. Add this item to your cart to see the shipping cost. Or pick up your order at our store in Ghent.

One of the most exciting live bands in the world, Belgian 3-piece BRUTUS, will release a brand new live record 'Live In Ghent' on October 23rd through Hassle Records. Capturing this incendiary outfit in their hometown of Ghent in front of 750 of their most die hard fans at this special, sold out show, is seen by the band as a way to balance out the fact a year of touring has been taken away from them and all musicians. With an album cover depicting Peters (Mulders, bass guitar) step-son, who wrote out their set-list on the night of the recorded show, 'Live In Ghent' goes some way to giving fans a taste of what they have missed in 2020 thanks to the ceasing of actual live shows.

The band explain a bit more - "When the real world went into lockdown, early March 2020, a year of live music disappeared before our eyes. Going on tour, playing festivals, watching bands, it’s all gone. It was as hard for us as it has been for everybody involved in live music. As a remedy, we took the time to look back on what we had already done and collected the footage we had of our previous shows. Painful and healing at the same time. That’s when we stumbled upon the recordings of our show at Handelsbeurs in Ghent, May 2019. A hometown show we fully recorded and filmed after a period of touring, in front of all our family and friends."

"We know it’s just a recording and not even close to the real feeling we had on stage or the energy we got back from the crowd in the room, but looking back, almost a year later, we feel absolutely proud about that show."

The band have actually played two live shows recently in Belgium, as a tentative return to concerts takes shape on mainland Europe. Recent shows: On July 17th they played the Rivierenhof in Antwerp, to 400 people (seated) in a 2000 people open air venue and on July 20th they played at Fort Napoleon in Ostend, to 100 people (seated), exclusive to band's mailing list fans.