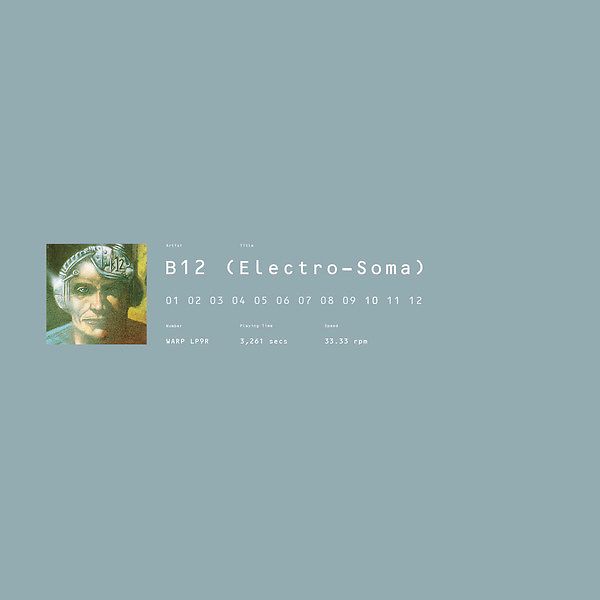 For the first time, Warp make B12’s seminal Electro-Soma - one of thee blueprints for ‘90s electronic and UK techno - available again. We’re sure that many will agree that it’s a pinnacle of early ‘90s electronic music and likewise welcome the fact that it’s now back in circulation. You may also like to know they will all be made available on vinyl again in the near future…

A staple of ‘back to ours’ sessions and psychonaut’s playlists since the turn of the ‘90s, Electro-Soma I, as it’s now titled, was compiled by Warp’s Rob Mitchell from Michael Golding and Steve Rutter’s early EPs as Musicology, Redcell and 2001, all self-released by the duo between 1991-1992 on their B12 label.

It’s some of the lushest electronic music of its era, unfortunately titled IDM - as opposed to what?! - when it actually, faithfully, and patently ripped from the early styles of Detroit’s 2nd wave. But absolutely nobody is holding that against them, as the music they recorded offered a uniquely lush, even sentimental, and technically adroit spin on the 313 sounds they had clearly fallen in love with.

To this day, the emo electro of Hall Of Mirrors, the kaotic harmonix of Metropolis, and the AI bleep ’n bass of Telephone 529 still sound beautifully misty-eyed and have the capacity to freeze a spine on contact.