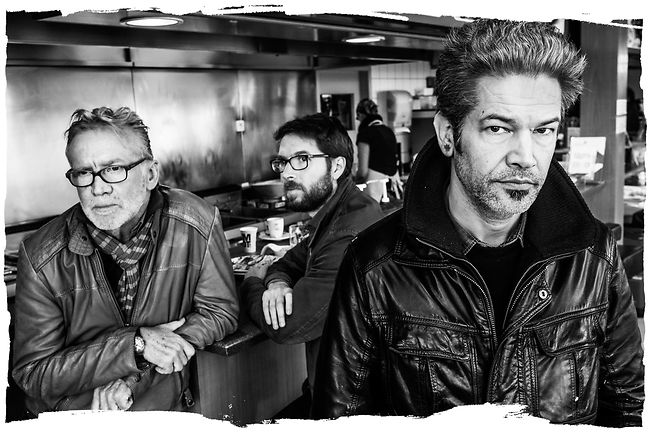 Think about pickles when you try to understand The Rhythm Junks. Pickles are the tasty combination of three vegetables, one would not easily combine : gherkin, cauliflower and silver onion.

The Rhythm Junks are much alike. The three members differ quite a bit in musical background. They have jazz, pop, rock, blues, folk, roots and soul in their genes.

The Rhythm Junks are above all Belgian pickles.

The oldest band member could be the father of the other two, who already differ half a generation. Apart from Belgium, the only place you’d find such a combination is in Cuba.

Because we are a small country with a rich musical culture, a dense population and loads of chances and opportunities to be professionally engaged in music. The ideal climate for adventurers to meet up.

Singer and harmonicaman Steven De bruyn was the founder of the experimental blues band El Fish and has worked together with many national and international artists like Zap Mama, Little Axe, Bob Brozman and Eugene Chadbourne.

Bassplayer and singer Jasper Hautekiet has been touring with Milow, The Bony King of Nowhere and Selah Sue.

Drummer Tony Gyselinck is one of Belgium’s finest jazzdrummers. Apart from his work with the National BRT Jazz Orchestra, he has teamed up with Toots Thielemans, Rocco Granata, Clown Popov and many others.

In late 2010 there was the stunning side-step with Roland Van Campenhout, which resulted in the wonderfully unpredictable ‘Fortune Cookie’. The 7-piece band from the successful albums 'Virus B-23' (2004) and ‘Pop Off' (2007) album was temporarily shelved.

Now The Rhythm Junks pick up where they left off, employing the "less is more" principle. The horn section was put on hold, from now on the band is a testosteroned triumvirate of three gifted guys on bass, drums, harmonica, vocals & slide guitar.

They scratch and blow, polish and beat, soft and hard, elegant and raw. The songs, well they crackle more than they used to... The ideal band for Tom Waits' golden wedding anniversary, basically, or something like that.