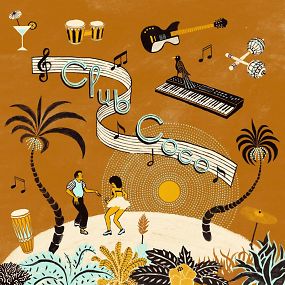 An attempt to give back something to music lovers around the world and print on an object a piece of the essence of the community that has been gathering around her weekly radio show at Worldwide FM.

In many ways, Coco María is like a music detecting sunflower. Just naturally she is turning her ears into the direction from where happily vibrating music from all around the world is emerging. She is a DJ and radio host whose musical selection tr ansmits the energy of the Caribbean, Brazil and the rest of Latin America through records full of samba, jazz, charanga and cumbia, whilst embracing an internationalist vibe that can also include the most eclectic influences.

In many ways, the tracks of the album showcase how these artists use music to reconcile both their pride in Latin American and Afro culture as well as their interest in being part of the cosmopolitanism of big European cities. Thus, each track adds a particular detail into building a perfect soundtrack for a community that is always travelling back and forwards between both regions, always looking for songs that explore the furthest frontiers of tropical music while staying true to the roots of their genres.