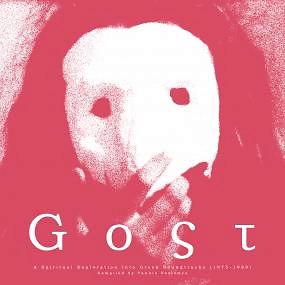 Turning attention on a boom period for mystical, transcendental arthouse cinema in Greece!
€ 24,95

Label
Into The Light

Having already explored the archives of a number of overlooked Greek composers, Into The Light is now turning its attention to the uncharted territory of Greek film soundtracks of the 70s and 80s -  a boom period for mystical, transcendental arthouse cinema in Greece.

GOST: A Spiritual Exploration into Greek Soundtracks (1975-1989) is a passion project from the Greek filmmaker and composer Yannis Veslemes, that took years of engagement,  exhaustive research and persistence. The collection features a mixture of rare, hard-to-find and previously unreleased material from musicians and composers including Yannis Kostidakis, Thesia, Dimitris Papadimitriou, Michalis Christodoulides, Stamatis Spanoudakis, Haris Xanthoudakis, Vangelis Katsoulis and Charlotte Van Gelder . All material is accompanied by detailed linear notes from the curator Veslemes, explaining the stories behind the tracks and the movies they first featured on.

The compilation celebrates the inventiveness and experimentation of Greek soundtrack composers in the ‘70s and ‘80s, by presenting a surprising mixture of musical hybrids that bridge the worlds of electronic and acoustic music, and compositions that bring together Western and Eastern musical traditions, in uniquely idiosyncratic ways.