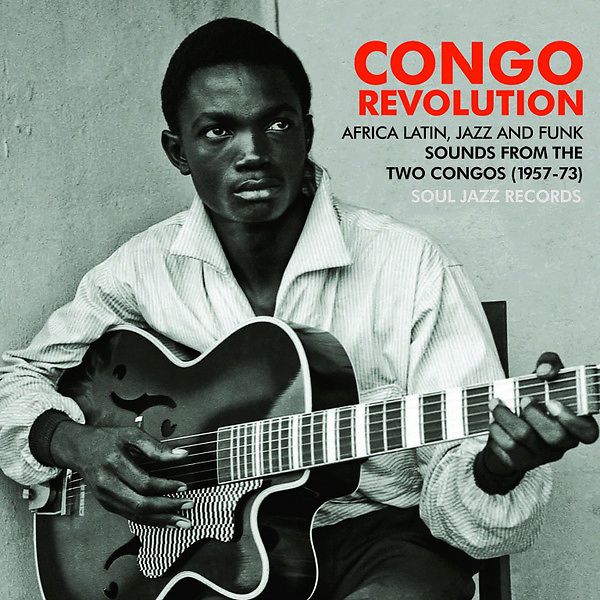 This stunning new release on Soul Jazz Records looks at the explosion of music that came out of the Congo in the years leading up to independence in 1960. Congolese rumba, a wild combination of African, Jazz and Latin influences, created future stars of its now legendary creators – Franco, Grand Kalle, Tabu Ley, Dr. Nico, Papa Wemba – and all feature here in their ground-breaking early groups such as O.K.Jazz, Brazzos, Rock-A-Mambo, African Jazz and The Beguen Band. The Congo is in fact two countries – The Democratic Republic of the Congo (DRC, formerly Zaire) and the Republic of the Congo. Congo Revolution was first released as a sampler 7” box set for RSD, and this expanded release includes a 50-page booklet/double gatefold and inner sleeves containing extensive text explaining the evolution of the music and history of the two Congos, and how music, politics and popular culture intersected at the point of independence from the two Congos’ European colonisers – Belgium and France – through songs such as ‘Vive Patrice Lumumba,’ and ‘MNC Uhuru,’ which celebrated the Congolese independence leader prior to his political assassination.

Also included is the stunning images of the Congolese photographer Jean Depara who documented the Congo’s vibrant nightlife in the period 1955-65 as well as being the official photographer for the superstar Congolese artist Franco up until his death in 1989. Depara also documents the rise of the Bills (Congolese teenagers who dressed as cowboys) and sharp-suited évolués (which later gave rise to the fashion-conscious phenomenon of the Congolese ‘Sapeurs’). These images are reproduced in collaboration with Revue Noire in France.

This album comes as a deluxe heavyweight double vinyl with gatefold sleeve and individual inner sleeves, CD with slipcase and 50-page outsize booklet, and as digital release.