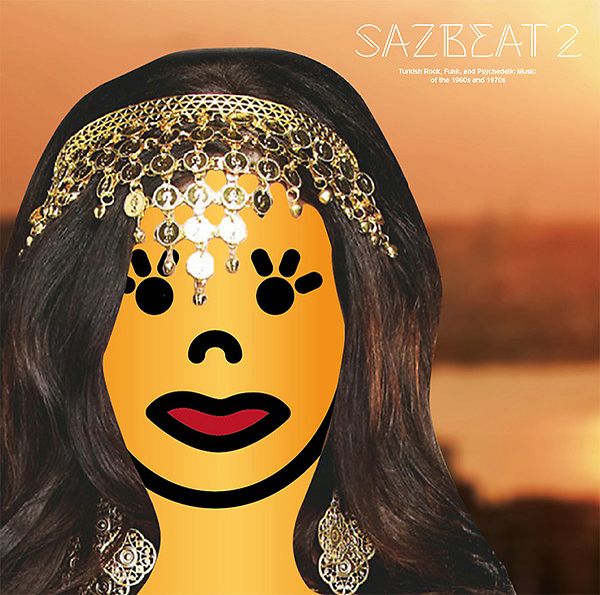 Saz Beat II Turkish Rock, Funk, and Psychedelic Music of the 1960s and 1970s Vinyl LP, comes with a fold-out poster showing the İmç building complex strictly limited to 500 copies worldwide Remastered & restored: Calyx Mastering Berlin Made in Germany. All rights reserved. 2015 From the curator of “Bosporus Bridges Vol. 2” and “Saz Beat” now comes the compilation “Saz Beat II” on Corvo Records’ sublabel Global Pop First Wave. This follow-up offers a fresh choice of tracks exploring the sounds of Turkey in the 1960s and 1970s. Their extraordinary blending of Western and Turkish elements and the variety of styles thrown into the mix are so constantly surprising that digging deeper will only yield richer revelations. The compilation presents a wide selection of music for dancing and listening, ranging from Anatolian rock to psychedelic pop and from oriental funk to far-out electrified folk. It contains an Anatolian rock anthem by Seyhan Karabay, superb harmonics and orchestral interplay by Erkut Taçkın, cool moog folk-funk by Hakki Yücel and Mıhrıcan Bahar, psychedelic sounds by Sevil & Ayla, smooth pop beats by Esmeray and Ömür Göksel, experimental pop approaches by Rüçhan Çamay and Kim Bunlar, heavy groove folk by Zerrin Zeren and Taci Özmen, and disco funk by Disco Div Div. All tracks have been carefully restored and completely remastered for full sonic impact at Calyx Mastering, Berlin. About the poster: The İmç (İstanbul Manifaturacılar Çarşısı), Unkapanı/İstanbul, is a modernist building complex with allusions to bazaar architecture constructed in the late 1950s. The complex still exists and hosts different companies, among them many of the Turkish music labels that were active in the 1960s and 1970s and remain active today. Visually, the buildings are stuck between past and present, conserving elements of an era long passed away.