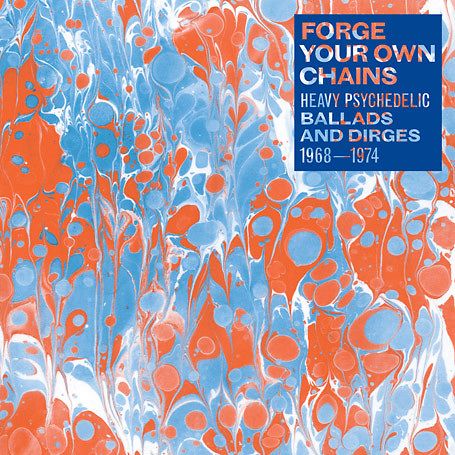 Collecting strains of heavy psych from the five continents
€ 32,95

When it comes to cratedigging labels dedicated to documenting niche scenes, there are two extremes you often wind up dealing with. On the one hand, there's the gatekeepers-- garage-punk supremacists, Northern Soul zealots-- that see their efforts as the preservation of a great subgenre. They're crazy and you don't want to strike up conversations with them at record fairs, but their fundamentalist attitude at least tends to result in their compilations being pretty consistent. And at the other end, there's the general-interest guys, the ones who started as sample hunters and wound up getting drawn into their source material. At best, they build unexpected and illuminating connections between bands and scenes that never knew of each other's existence; at worst, they sometimes mistake "I found it first" for "this should be heard immediately."

Now-Again falls in that second, egalitarian category, and Forge Your Own Chains represents the best and worst of that impulse. To the credit of curator Egon, his liner notes state that the purpose of this collection isn't to show off a bunch of rare collector-baiting nuggets but to find common threads between an international assemblage of acid-rock oddities. And the subtitle-- Heavy Psychedelic Ballads and Dirges-- points to an intriguing vein of music; more intriguing yet is the aim of collecting variations of it from five different continents. But when you're working with psychedelic rock, one of the most uneven genres when it comes to old, small-press, and private-press releases, even the best intentions can result in a bit of a mess.

The good news with Forge Your Own Chains is that listening to it all the way through will leave you with both positive first and last impressions. Bookending the comp with its two most sprawling and intense tracks is a canny move, and what Top Drawer's mournful, wailing-guitar-in-a-cathedral epic "Song of a Sinner" and the open-throttle squall of Baby Grandmothers' "Somebody's Calling My Name" share is a sense of slowly-building anxiety, which they use to different ends. But a sizeable chunk of the stuff between these two tracks lacks a lot of their focused intensity, and there's moments where a conceptually promising piece of music is let down by an amateurism that can't quite match the ambition.