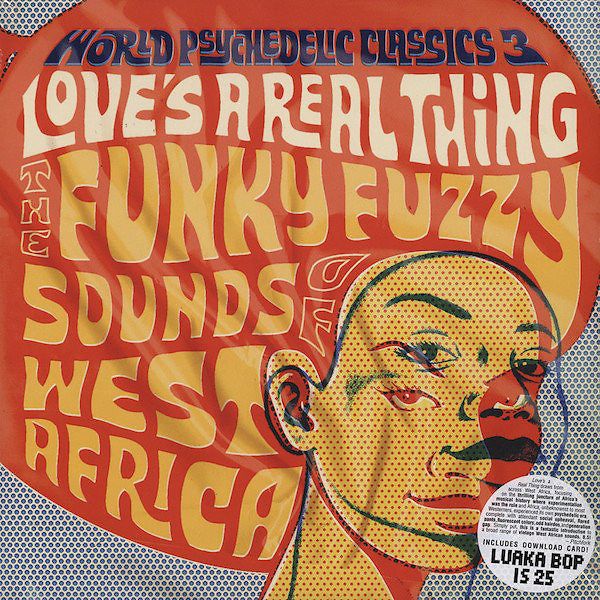 These twelve astonishing tracks are drawn from a broad spectrum of early 70s West African psychedelic classics. Yet the fact that they scarcely registered on the Richter scale of contemporary underground music must surely be one of the greatest ironies of modern popular music, given that western counterculture drew so heavily on the musical, aesthetic and visual traditions of Africa.

Musically, the transatlantic links are strong and obvious; from the urban black American soul and funk of James Brown, through the West Coast sounds of Hendrix, to the deeper grooves of Cuban rumba and Latin percussion. During these years a nod in the direction of Detroit, Los Angeles or Havana was still more important than learning the latest lines from Lagos, Kinshasa or Accra.

But by the early 70s the transition from the direct imitation of western pop was well underway, and if the period of ‘authenticité’ had not yet arrived, there was certainly sufficient experimentation by a younger generation of musicians, producers and studio engineers to mark out this era as something special. This compilation represents a unique period of musical cross-fertilization as the influence of the Beatles and Elvis steadily gave way to that of Franco and Fela.

By the late 60s the earlier synthesis of western popular music and African idioms, purveyed by such luminaries as E.T. Mensah, Bobby Benson, the Star Band and Alfa Jazz was wearing thin. A younger generation of musicians, more confident and self-assured in its African roots, with plenty to react against, was establishing itself as the authentic voice of African rebellion and black power.

Meanwhile, in the French speaking countries, innovators like Orchestre Poly-Ritmo from Benin, Manu Dibango from Cameroon and a clutch of state-sponsored bands from Guinea seemed to jump a generation by moving straight from boleros, cha chas and foxtrots to the heavily Latin influenced sounds of the Sahel. By the end of the decade the ‘black-roots modernisers’ were on the move across the Region.

By the late 1960s, the West African club scene, typified by such legendary venues as Weekend in Havana and the Tiptoe in Accra, the African Club in Lagos and the Rose Pavilion in Dakar presented a truly urban, good-time, weekend dance scene. The music was electric, amplified and unambiguously youthful, bringing, in time, a touch of modernity to even the most remote villages. This was new music for a new generation.

The technology of making music similarly leapt forward in this period of rapid social and economic change. New studios sprang up in the coastal capitals as producers and entrepreneurs such as Faisel Helwani, Dick Essiebons, King Bruce and even Ginger Baker embraced the aspirations of the new generation and smoothed their way by supporting new crossover and fusion experiments, including the introduction of keyboards and effects to modern African music.

Imported psychedelic music also provided new insights into how the rest of the world was thinking, inspiring a wave of creative, cheap and cheerful cover designs and providing an opportunity for younger graphic artists, such as Lemi Ghariokwu, (the designer of the Fela Kuti covers), to display their talents.

This new generation of West Africans took to psychedelia like ducks to water. All the essential ingredients existed in abundance in the burgeoning metropolitan capitals of West Africa: centuries of psychotropic experience, the strongest source music on the planet, decades of adapting western pop to local tastes and an affinity with anti-imperialist ideology. Add to this heady brew a cultural philosophy which actively promoted music, a relaxed attitude to sex and the day-glo visual imagery of daily life, almost guaranteed that West Africans would embrace funk, soul and acid rock as something familiar if not entirely home-grown.

Thirty years on we can only speculate what impact the atmospheric and mesmeric rhythms of the Sahel, allied with the funkier sounds of the coastal capitals, would have had on a western generation being weaned on mind altering substances and a new appreciation of non-mainstream music. These dozen tracks are representative of the African beats missing from Monterey and which Woodstock lacked at a time when a global perspective was becoming more important than ever in the heart of corporate America.