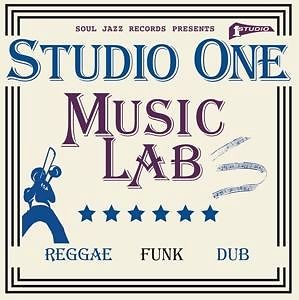 Delving DEEP into the unique melting pot sound of reggae, funk and dub at Studio One in the 70's!
€ 30,95

THIS ALBUM IS DEEP!

This new release delves deep into the unique melting pot sound of reggae, funk and dub created throughout the 1970s at the Studio One music lab situated at 13 Brentford Road, Kingston, where the intense experiments and collaborations of crack musicians, singers, DJs and engineers under the guidance of producer Clement 'Coxsone' Dodd produced the most forward-thinking music ever to come out of Jamaica.

Here you will find some of the deepest and rawest cuts to emanate out the Studio One factory - truly hypnotic rhythms, powerful funk guitar and bass, soaring horns and more interspersed with occasional vocals and toasting as musicians reach for the highest heights and deepest roots of reggae music.

Some of these tunes here are rare and classic versions to seminal Studio One vocal cuts from the likes of Horace Andy and Hortense Ellis. There is also a wealth of cuts from simply the greatest musicians ever to come out of Jamaica (let alone Studio One). These include Jackie Mittoo, Roland Alphonso, Cedric Brooks, Ernest Ranglin and the Brentford All-Stars.

You will find straight up funk bombs such as Lennie Hibbert's mind-blowing 'Go For Yourself' (sounding like The Meters meets James Brown!), the Brentford All-Stars covering War's classic 'The World is a Ghetto.' and Jackie Mittoo showing how to make Cream's 'Sunshine of Your Love' into a reggae funk bomb!

All of these sit beside super-deep roots and dub cuts that exemplify together how Studio One was unique in Clement Dodd's pioneering vision of reggae, the music created functioning with a continuous level of experimentation that blurred the lines between genres and pushed the outer limits of reggae music at all times.

1. Hortense and The Sound Dimension – People Make the World Go Round Version

2. Leroy Wallace and The New Establishment – Far Beyond Version

5. Lennie Hibbert – Go For Yourself

7. Brentford All Stars – The World Is A Ghetto

8. The Jay Tees and Brentford Rockers – Forward To Jah (Part 2)

15. Jackie Mittoo – Sunshine Of Your Love