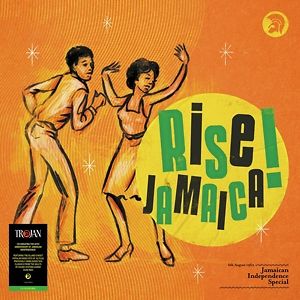 A COMPILATION CELEBRATING THE 60TH ANNIVERSARY OF JAMAICA’S INDEPENDENCE

Trojan Records have today announced a new compilation album Rise Jamaica! Jamaican Independence Special to celebrate Jamaica’s 60th year of independence. The album, out on double CD, double vinyl and digital, will be released on 5th August and will celebrate the hugely influential sounds of the island nation.

Marking the 60th anniversary of Jamaica’s independence in August 2022, this celebratory collection will showcase an array of the island’s major hits as well as previously unissued tracks, all of which were recorded in 1962, the year that the island became a sovereign nation. The album will be available as a limited edition 28 track 2LP colour vinyl set (Disc 1 Green Vinyl & Disc 2 Yellow Vinyl) and also as an expanded 50 track 2CD Digipack.

Focusing on the biggest home-grown sellers of the year, the first of the two discs features ska and R&B hits from some of the first generation of Jamaican recording stars, including Jimmy Cliff, Derrick Morgan, Owen Gray and Don Drummond, while the second disc comprises early 60’s Jamaican ska and previously unissued recordings produced by the country’s leading sound system operator turned record producer, Duke Reid.

Jamaica gained independence from the United Kingdom on 6th August 1962 and since that historic day 60 years ago, the island has had a profound influence across the globe. This is particularly true of the island’s music industry. In 1964, ska took the world by storm with its successor rock steady initially dominating the local music scene, although it was the development of the irresistible sound of reggae in 1968 that ultimately led to what has become a long-time love of Jamaican music around the globe.

Today, Jamaica stands a proud, independent nation which continues to inspire and influence many around the world. This album pays tribute to the artistry, ingenuity and brilliance of its people.