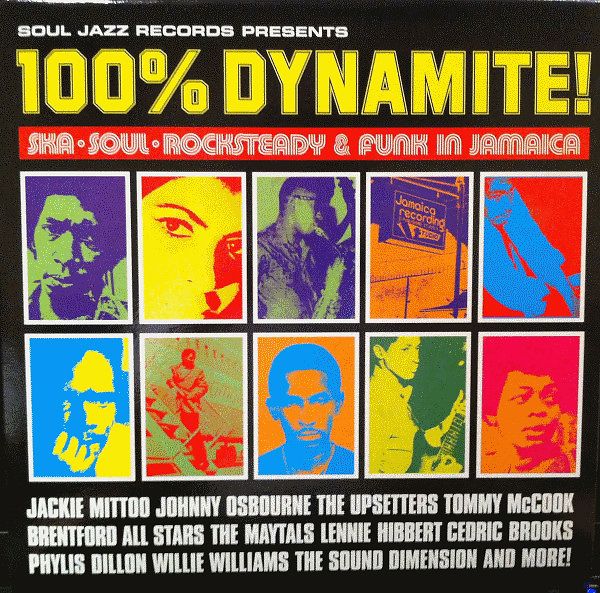 100% Dynamite is among the finest reggae compilations ever assembled.
€ 39,95

Since the album’s original release,100% Dynamite has become a cornerstone of funky reggae music. Eighteen killer tracks that show the influence that American Jazz, Funk and Soul music had on Jamaican Reggae.

The album was Soul Jazz Records first foray into the mighty vaults of Studio One and many of the tracks featured come from the legendary label and the expanded edition features seminal tracks from the greatest Jamaican producers – Clement Dodd, Lee Perry, Winston Riley (Techniques) and many more.

100% Dynamite features come serious and heavyweight Jamaican funk by Jackie Mittoo, The Upsetters and Toots & The Maytals, alongside the cream of Jamaican jazz musicians such as Tommy McCook, Cedric Brooks and Lennie Hibbert. Also included here are killer Reggae versions of USA Soul classics including Marlena Shaw’s ‘Woman of the Ghetto’, Aretha Franklin’s ‘Rocksteady’, Syl Johnson’s ‘Is It Because I’m Black’, William DeVaughan’s seminal ‘Be Thankful’ and more.

Jamaican/USA influences went both ways and included here are many cornerstone reggae songs that cross into the worlds of both hip-hop and punk worlds – check Brentford All Stars massive ‘Greedy G’, the basis for Boogie Down Productions’ ‘Jack of Spades’, and Willie Williams’ ‘Armagideon Time’ later covered by The Clash.