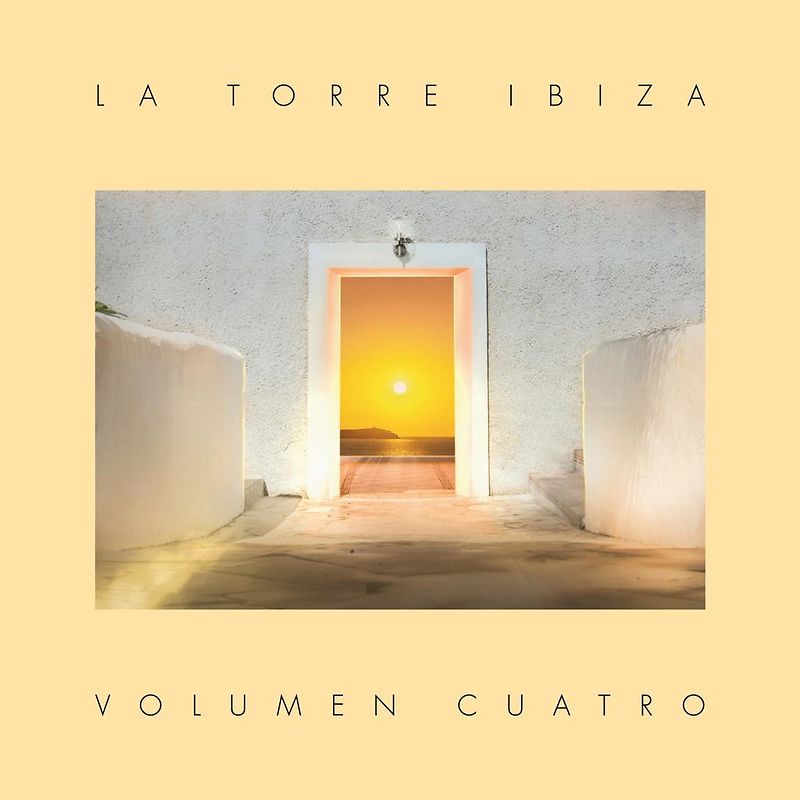 PRE-ORDER ITEM: This item will only be shipped to you on or after 1 July 2022. Please note any orders containing pre-order items won't be shipped until all items are available, so please order this separately to avoid delays. Release dates are at the mercy of labels, distributor, and pressing plants and will change constantly.
PICK-UP AT SHOP / FREE SHIPPING FOR ORDERS WITHIN BELGIUM AND EXCEEDING € 100 (FYI: we notice delays at Bpost which are out of our hands, if you want to be a 100% sure about delivery date, best choose pick-up) / Shipping costs are dependent on various factors and are calculated in your shopping cart. Add this item to your cart to see the shipping cost. Or pick up your order at our store in Ghent.

Mark Barrott and Pete Gooding present the fourth volume in their series of stellar collections, showcasing the sunset sounds spun at Ibiza`s Hostal La Torre. Sets, sequences, of music designed to celebrate the passing of another day and welcome the pleasures of night, as the Sun makes way for Sister Moon.

On this occasion, the ceremony starts with a gift from the Golden Girls - a side project of Phil Hartnoll, of Orbital fame. In its original form Kinetic was a prime piece of pumping early `90s trance, here, however, it`s been remixed by David Morley into something far more in line with Belgian rave label R&S` ambient off-shoot, Apollo. Practically beatless, but boasting a big, undulating, bottom-end, it now resembles something from Tangerine Dream`s back catalogue. A slightly kosmische, serene wall of sonically shining sound. The room-shaking riffs are reduced to echoes, while pitter-pattering percussion races. When the familiar hook finally surfaces, it`s accompanied by spirit-stirring, symphonic strings - inducing fierce flashbacks to quality highs, and newly expanded minds and horizons. Man, I can remember the wonder, before it all went pear-shaped.

Next up are NO ZU, a sadly seemingly defunct 8-membered musical monster from Melbourne,  Australia, who were absolutely amazing live. Banging out a percussive concoction that they called Heat Beat, their funk was / is most definitely post-punk - channelling `80s no wave New York, the Mudd Club, and in particular the band, Liquid Liquid. Slapping basses, car horns, electronic keys, buttons, cowbells, and anything else that came to hand and seemed to fit, while lifting beats and piano parts from Chicago house. The party-starting call and response repartee of Ui Yia UIa finds them shouting out their star signs of criss-crossing compatibility over a muscular slo-mo stomp. Daphne Camf Rest In Peace.

Bassekou Kouyate is a Malian maestro on the 6-stringed ngoni. A goat-skin covered “hunters harp”, that via slave traders evolved into the North American banjo. With his group, named after this traditional griot instrument, and Zoumana Tereta on lead vocals, he delivers a dizzying display of dexterity on Bala. Generating a super mellow, spiritual groove, his playing countered by equal virtuosity on balafon and bolon. The voices switching between the sweet and the raw, and the song showering you in savannah sunshine, no matter where you happen to be hanging.

The Synergetic Voice Orchestra was a one-off, one-time only outfit led by keyboardist / composer, Yumiko Morioka. A follow-up to her highly respected solo piano work, Resonance, the album, MIOS, was a far more ambitious affair, that brought together a collective of 6 musicians and 3 vocalists. The results moving away from new age and modern classical toward pop. The track, Zebra, is a Jon Hassell-esque fusion heat haze / fog. Riding a slowly rumbling thunder-thumbed bass-line. A snake-charming woodwind cutting through the synthetic shimmer, weaving its seductive spell.

Family Doggo first appeared as the b-side of Paul Woolford aka Special Request`s balls-out 2020 drum and bass single, Spectral Frequency. “Doggo” in comparison is an oasis of calm, albeit packing some serious sub-woofer worrying boom. Stripped back, speaker-rattling, electro-edged introspection, emotive and euphoric without recourse to arms-in-the-air tropes, it`s bleep`s more sensitive, more thoughtful sibling. The awakening of the morning after the night before`s rush.

Margaret Wakeley`s magical Hard To Leave The Island was initially rediscovered and dusted down by the people that power the respected DJ / artist agency, Warm - who took it from Margaret`s 1976 LP, Better Days, and pressed it on a limited 45. A slice of superior soft / yacht rock, it`s a cool cocktail-hour summer holiday serenade. A sophisticated arrangement of brass, jazzy keys, and acoustic strum, topped off by a smart sax solo.

Equatorial Sunrise was / is one of the standouts contained on Pauline Anna Strom`s sadly posthumous album, Angel Tears In Sunlight. Describing herself as a Trans Millennium Consort, the San Francisco-based synth pioneer attempted to blur, blend, past, present, and future, with her novel new age music. The song in question sees wind-chimes, marimba, and talking drum conversing in counterpoint - conjuring the Cafe del Mar classic, Richard Wahnfried`s Grandmas Clockwork. Its calming, time-melting timbres creating a comforting analog bubblebath. Aching with synthesized ethereal emissions, while pinpoints of sound echo into infinity, like signals from distant stars.

The Vendetta Suite is the pseudonym of Gary Irwin, the former in-house engineer at David Holmes` Belfast-based Exploding Inevitable Studio - a hive of musical activity where Timmy Stewart was also a frequent visitor. The 3 amigos mentioned were all stalwarts of the city`s early `90s house and techno scene. Some 30 years later Timmy remixed Gary`s track, Warehouse Rock, into a highly strung - think Malcolm McLaren`s Deep In Vogue - soundclash of reggae and rave. A four-to-the-floor mediation subjected to devastating washes of delay, where bionic bass, Mikey Dread samples and dub sound-effects are softened by bucolic birdsong.

Mark Barrott’s Travelling Music (La Torre Reprise) - an exclusive version of the titular track from his recent E.P. - is all tumbling tones - playful sequences and programmed patterns “blowing” busily, like colourful streamers caught on a tropical breeze. Like the compilation`s opening number, its another ambient, beatless, trance-dancer - suffused with sustained swells and chords that feel like sunrise itself.

If you look on Wikipedia, you’ll see that Suzanne Ciani has the affectionate moniker of “Diva of the Diode” - reflecting her huge importance in the history of electronic music. While studying at Berkley University in the `70s Suzanne became firm friends with Don Buchla, and subsequently spearheaded the use of his then ground-breaking modular synthesizer. Moving to New York, where she camped out on Philip Glass` studio floor, Suzanne set up her own company employing Don`s marvelous machine to produce advertising jingles. The success of this business eventually led to Suzanne becoming Hollywood’s first female soundtrack composer. In the `80s, Suzanne then started releasing new age records, one of which, 1986`s The Velocity Of Love, was a favourite of DJ Phil Mison, who made it a Cafe del Mar sunset staple. The beautiful Eighth Wave surely should have been the blissed-out musical backdrop to some `80s art house love scene - summoning as it does silhouettes of cinematic protagonists passionately disrobing though a Vaseline-smeared lens. Their hot clinches politely cutting to close-ups of isolated, moonlit beaches, and untamable, tempestuous tides.

JIM is Jim Baron, Crazy P`s Ron Basejam, but in folky, singer / songwriter mode. Coming on like Crosby, Stills & Nash, he covers the Ian Astbury / Billy Duffy penned Phoenix in an ultra-laidback fashion. Turning the gothic rock into a Laurel Canyon-esque lullaby. Singing of love in terms of fire, and flames of desire, backed by acrobatic acoustic picking and sweeping orchestral strings.

You could be forgiven for thinking that Antipodean audio auteur, Geoffrey O`Connor, is some forgotten `80s idol - so authentic is his soothing, swooning, romantic synth pop. Her Name On Every Tongue, however, dates from 2014, and can be located on Geoff`s sophomore solo long-player, Fan Fiction. The track`s vocoder harmonies proving perfect for a sing along on a top-down, Californian coastal drive.

These righteous solar-worshiping rituals draw to a close with John Foxx & Robin Guthrie`s exceptional Estrellita - a highlight from the pairs 2009 album, Mirrorball - where the former Ultravox! and Cocteau Twins founders collaborate on a sublime shot of shoegaze. Generating a glacial glide of layer upon layer of treated guitar. Grounded by womb-like bass vibrations, while Foxx`s choirboy croon soars. Lending the song a prayer / hymn-like air. It`s as close as rock comes to something sacred.