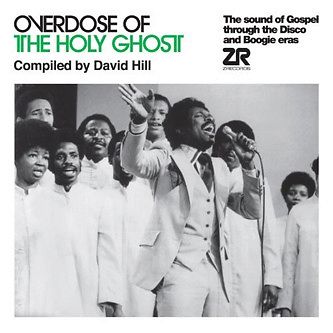 Repress! Following on from the likes of ‘Backstreet Brit Funk’, ‘Destination Boogie’, ‘GoGo Get Down’, the well-received and growing Under The Influence series and the ever-popular Soul of Disco albums, Z Records continue to release high quality compilations filled with lesser known disco, soul, funk and boogie. Now ZR returns with a long overdue repress of the 2013 Gospel album compiled by David Hill.

The album leads with a track from The Clark Sisters who are without doubt one of the most successful and prolific family gospel groups of the last forty years. Originally released on S.O.G. Records (Sounds of Gospel), ‘Overdose of the Holy Ghost’ was recorded in 1981 and would go on to become the group’s biggest crossover hit after being licensed to Elektra Records and released internationally in 1983. The ‘Queen of Gospel Music’, Shirley Caesar turns in a smoldering, socially conscious, Philadelphia International inspired groover with ‘Message To The People’. Gospel artists are well known for taking popular secular songs – or riffs from them – and adapting the lyrics to take the song in a spiritual direction. Kristle uses The Emotions’ ‘Best of My Love’ as its foundation, and builds from a slow intro, gradually turning up the heat until it’s the dancefloor burner that is ‘I’ll Go’. With further disco and funk induced soul provided by many more Gospel luminaries, plus exclusive edits from David Hill and Z Records’ Dave Lee, ‘Overdose of the Holy Ghost’ is a shining example of church music that has been influenced by secular soul that was built for the dance floor.
“Gospel music has often followed the prominent trends in secular music, probably in the hope of widening its audience by giving the subject matter a sprinkling of cool. In the 60s it happened with R&B and then funk flavoured gospel, the 70s brought sweet-soul crossovers, and by 1975 the sounds of early disco had started to permeate the genre. This compilation brings together overlooked gospel gems that have their production rooted in disco and boogie, the sound of the early 80s that followed in disco’s wake. It’s only recently that this music has begun to be appreciated by fans outside of its original target market, and I’m glad to help it finally reach a wider audience.”

David Hill began his music career in 1994 as a member of the Ballistic Brothers, together with Ashley Beedle and Rocky & Diesel of X-Press 2. In 1994 he co-founded the Nuphonic record label that also produced the Sony award winning London Xpress radio show for Xfm. He continues to work as a music consultant to several record companies and on personal projects such as Rootikal, the monthly roots reggae night, and has a number of reissue and compilation projects currently in production. He is also currently overseeing the production of a book and an accompanying touring exhibition that will showcase Bill Bernstein's photographs of New York nightlife in the late 70s.
As always with Z Records, they've spent time and money to make the masters sound as good as possible so if you're a fan of compilations from BBE or Dimitri From Paris and their own Soul of Disco & Under The Influence CD’s then this Gospel album will not disappoint.